"Public Figures Of Our Days" 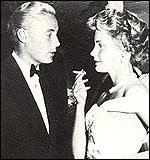 Martha Sharp Crawford von Bülow (Sunny) (born September 1, 1932 in Manassas, Virginia) is an American heiress and was a socialite and philanthropist in earlier years. She was the wife of Claus von Bülow. Since 1981 she has been in a persistent vegetative state following an unexplained coma. The coma was attributed to hypoglycemia from injected insulin, and her husband was convicted of attempted murder after a highly publicized trial. The conviction was overturned by an appeals court, an incident dramatized in the movie Reversal of Fortune (wherein Bülow as played by Jeremy Irons in an Academy-award winning star turn). Many aspects of her coma remain unexplained and a subject of conjecture and controversy.