"The middle class too, having sorted out its interests in rising to the position of leading force in the world, took every effort to maintain a discreet distance from the former pleasures. In the late 19 th century, the established theatre had clearly eliminated all the typical ingredients from the old witches' kitchen of the spectacle. Since then, the German term Schauspiel (for the dramatic performances in the theatre) has had a more sober or sublime ring to it. Wild exaggerations, carnivalesque elements, freaks, agitation or apparent profanity - all that could only be tolerated on the cultural periphery, in sideshows and cabaret, in circus marquees, at the zoo or in the, mainly temporary, fun fairs that served to «amuse the people». "
Publicada por Amet

This is a song
About my dearest friend Agatha Christie

And nearby there was a river
And she was looking to her own reflection in the water
Saying: God, oh God… Why me? Why me?

So God decided to come down
And put his hand on her shoulder
Saying: Agatha don’t you cry no more
Agatha, you are beautiful to me

And nevermore, did she thought about suicide

Sobre a mesa a faca

Design and Crime (and other diatribes)
por Hal Foster
Verso

"What are the findings that Seabrook makes? Not surprisingly, they boil down to hypotheses about identity and class. "Once quality is deposed", he argues, identity is "the only shared standard of judgment." For Seabrook this identity must be "authentic," and it can only be made so in nobrow culture through a personal sampling of pop goods at the Megastore: "Without pop culture to build your identity around, what have you got?" "
Publicada por Amet

Hardcore from the Heart (The Pleasures, Profits and Politics of Sex in Performance)
de Annie Sprinkle (edited by Gabrielle Cody)
Continuum

"Dear Reader. Gee it's been swell.
Possibly you're working on your dissertation, or you saw one of my performances and were curious about the behind-the-scenes aspect of them. Maybe you are a sex worker branching into the art world, or an academic branching into the sex world. You must be interested in theater, and you no doubt are interested in sexuality. Whoever you are, I am grateful for your attention and your interest in my work. I am honored and humbled by it. It is my sincere hope that you got something of use from this book."
Publicada por Amet 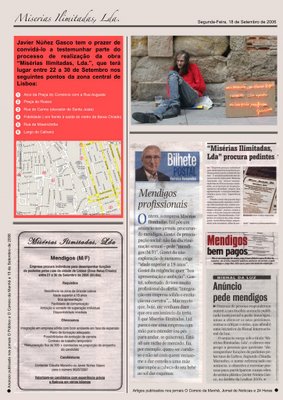 4th Theorie- Apocalypse is not predictable
Ok, it has happened to everyone to be sitting around and then something totally uncalled for happens! (Eg. A beautiful sunny day turns cold and rainy) Maybe, just maybe it’s because some smartass is toying with us. Perhaps Earth is just another scenario in one of those Sim games and some little 6 year old is playing with all the keys! Just you wait, soon that kid is going to find the "Quit this Game" button! Then what will happen????
Publicada por Amet

3rd Theorie- Yawning as the primal movement
Yawning Is Contagious: You yawn to equalize the pressure on your eardrums. This pressure change outside your eardrums unbalances other people's ear pressures, so they must yawn to even it out. Therefore in rather a Popperian movement, the movement of today’s possible yawn is nothing less than the perpetuation of the first Historical yawn.
Publicada por Amet

2nd theorie – On blindness
I will start my theory with a definition of West: n. from the greek occedere, which means where the sun disappears, darkness. And it is very curious that almost all masters in literature are blind such as Tiresias, the blind master of the Greeks. They, the blind masters, are a representation of the occident, of the West. They have their eyes shut to the outside so they can have some new and personal ideias. In conclusion, blindness may be a way to the aufklarung (enlightenment).
Publicada por Amet

The Master of Theories did not exist in Discotheater. Here are some of the theories that he had (before disappearing)...

1st theorie – Large Trousers
Everyone knows that poverty has always existed. But my theory around large trousers has its focus on the poverty produced by the apocalyptic nourishment of the industrial advent. The base of my thesis is that, since the empowerment of the middle class, with it’s rise to a kind of richly modus vivendi of bourgeoisie, the space between the lower class and the middle class has deepened, and therefore poor got thinner as the richer got fatter. And since the poorer have always kind of recycled in some medieval way, things and objects left or abandoned by these new noble people, the pants which they get hand to in some garbage can or in some charity shop, have also growned. So, in a very unexpected way, whereas we would think that it would be the other way around, they try to fit their little bodies into those large trousers. And because lifestyle is destined to a massive number of people, and since the poorer have growned in percentage, by a tautological deduction, what was born as a necessity has become a master rule of the aesthetics of society. Everybody wants to wear large trousers. Here lies the big problem. As the rich get larger, and since they want also a part of the cake, they will demand industry even bigger trousers for their big bodies. And therefore, one day we will have a pair of trousers so large that will dress the whole world.
Publicada por Amet "I'm sorry, I can't answer that question because I see no difference between the concrete and the abstract."

"I see no difference between the theater and movies. It is all theater. It is simply a matter of understanding what theater means. That is not generally understood. I mean, what do you call the place where a movie is seen if it is not a theater?"
Publicada por Amet

About Brecht
Brecht out of fashion

I am very interested in fashion. And since now even the hippie look of the late sixties has become fashionable again as grunge, and has naturally also disappeared the way fashion always does, I ask myself whether misery, poverty, and exploitation as literary subjects can come into and go out of fashion just as well. Brecht's leather coat, for example, this icon in the photographs, a piece of clothing deliberately sewn together crookedly (so that the collar would nicely stick out!), proves to me that appearance--that which is "put on" the literary subject matter--was very important to Brecht. But if the tireless naming of victims and their exploiters remains something strangely external to his Didactic Plays, something like a sewn-on collar (even though the naming of perpetrators and victims is really the main point), one could say that the work of Brecht, just like fashion and its zombies, very visibly bears the date stamp of his time. It is, however, exactly in the disappearance of the opposites, which are exposed as mere externals (misery and luxury, poverty and wealth), that the differences, strangely, come ever more irrefutably to the fore; and that is precisely what Brecht wanted! The basic tension, namely the gap between the real and what is said, is incessantly thematized by Brecht. Language fights against its subject matter, which is put on it like clothing (not the other way around!), a subject matter which is a piece of fashion; but how is one to describe fashion now? One can't. Thus the opposites master/servant etc., not unlike clothing, elude any description--even mock the very attempt at it. The real truth about these appearances we have to regain, time and again, from the codes of the externals by which the members of class societies are catalogued like pieces of clothing. That is to say, we have to look for the opposites behind the subject matters. Since we will not succeed, as little as Brecht could ever have succeeded in producing such a description (because the description would have used up everything that there might have been as its own raw material), there remains, even in Brecht's Didactic Plays, which seemingly are entirely congruent with their function, an ineffable, indescribable residue about which nothing can be said. And it is only about this residue that one can now talk.

I want to be shallow
by Elfriede Jelinek