Žižek in a nutshell #3 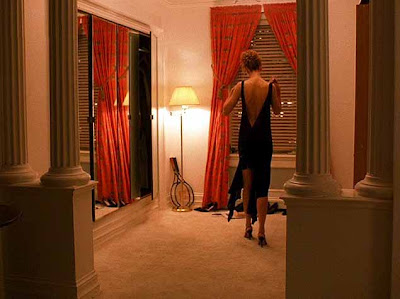 Stanley Kubrick’s movie “Eyes Wide Shut”, is an extremely interesting film that concerns precisely the notions of shared enjoyment, theft of enjoyment and the power of fantasy. Many critics reproached the film for its sterility. But I think that, far from being a failure of the film, Kubrick’s genius is that he understands the utter sterility of fantasy. What the film shows is that instead of penetrating into a world of enraptured ecstasies, the deeper you go into fantasies the more fatuous and empty they appear, until towards the end of the film, we have the famous collective orgy that is totally aseptic.
Sexual difference is also crucial here because the two perspectives that Kubrick explores are not symmetrical. At first glance we have a married couple – Nicole Kidman and Tom Cruise – and in each of them the fantasy explodes. The authentic fantasy that holds any real meaning – is her fantasy and what he desperately tries to do is to match up to, or resuscitate, something that would be at the level of her fantasy. Ultimately, he fails.
The standard interpretations of the film is that you have a self-complacent married couple who get seduced into fantasizing and then, just before getting lost in the abyss of all-consuming desire, they control themselves and step back. But I think what the film really shows is a traversing of the fantasy through experiencing its stupidity. In this sense, it’s a much more depressing lesson. It’s not that fantasy is a potent abyss of seduction that threatens to swallow you but quite the opposite: that fantasy is ultimately sterile.
Publicada por Pedro Zegre Penim