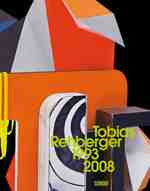 "According to the art historian Ina Blom, in contemporary art it is no longer a matter of what style is or whether it is full or empty; instead style pulsates around oppositional figures such as singular/general, subject/system, art/the everyday. It is therefore relevant to focus on how style performs a kind of double gesture that both produces these divisions and renders them uncertain. Blom suggests that if we think of it as a non-category, we can pay attention to it in a more detailed, flexible and situational way rather than if we say that style is one thing or the other. Unlike post-modernity's trans-historical tenor, then, the field that Rehberger plays on is an existential one, to use that term. But rather that humanism's subject - who is truthful inasmuch as 'subjectivity is the only truth', as Kierkegaard put it - subjectivity in Rehberger is dissipated because he turns our attention to the fact that like is in the object - or that the object has life-giving properties. To Scott Lash and Celia Lury, the objects of today's global culture industry - among which we can count art works - are virtual objects. This is because culture increasingly seems to escape the register of representation and reconstitute itself in the register of things. As virtuals, they are potentials that generate a succession (a series or flow) of actual forms. They are not dead labor like Marx's classical commodity. As potentials that generate a process of forms, they are very much alive. Hence the users' or the public's meeting with an object is not just an experience of it (it is 'not just subject-object', as Lash and Lury write) but an intersubjective encounter, 'which is at the same time a process of exchange, involving what we understand as a social imaginary'.
Publicada por Amet