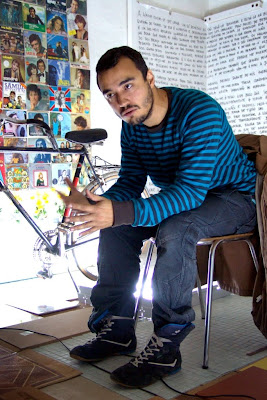 http://www.nitrafest.sk/fest09/index.php?rec=en&co=predstavenie&id=4
Ironic and playful, such is the multi-language production with two actors searching for the integrity of the European identity but fi nding only artistic and personal desintegrity. After the brilliant linguistic “tour d´Europe” of one of the two actors featuring 35 languages by which the nations of Europe formulate their ideas and do (not) communicate with each other, there is a detective quest for common European cultural roots and for what creates the pillars of our society. There is no defi nite answer to this even in the thoughts of the most important European writers, let alone in the Eurovision Song Contest, this celebration of European averageness generations of today’s Europeans were growing up with. The Teatro Praga came into existence in 1995 as a theatre group without a director and today it is considered one of the most interesting elements on the Portuguese theatre scene. It surprises by its unique sense of humour and self-irony as well as the ability to artistically transform project by project. The group takes to the stage all what even in a small amount infl uence our today’s perception, and it confronts it with the cultural, political and social sediments which formed us in the past.
Publicada por Pedro Zegre Penim