I believe in a thing called love / Just listen to the rhythm of my heaaaaaaart!!!

Tristan is not just an Opera: Michael Tanner (Wagner, 1997) was right to point out that if one is to make sense of Tristan, one has to approach it not simply as a work of art but as an ontological statement about the last things, about the meaning of life. The problem here is not the standard postmodern quip about who, in our cynical post-ideological era, can still take seriously big metaphysical solutions such as the Wagnerian Liebestod but rather the opposite one, that is, today's ambiguous relationship toward belief (or firm conviction as such). Suffice it to mention two thoroughly different examples. Is it not deeply symptomatic how - in some European countries, at least - priests and right-wing populist politicians are among the most popular guests for roundtable TV debates? What makes them so fascinating is their very naive sticking to firm conditions; the fact that they dare to stick publicly and firmly to their convictions makes them such an easy target. The second example: Why do fans insist on watching a soccer match live, even if it is in front of the TV? Why is this never the same as watching it later? The only honest answer is: to help their club, to magically influence the game. 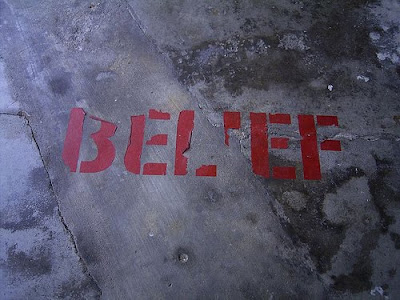