let me stay in your summer

Ariel - Of course. It was one of the most beautiful summer nights I'd ever seen.

Andrew - It was very romantic. I think about that night all the time.

Andrew - Yeah. And when I do, I want to kill you. Kill you or myself, but much more you.

Andrew - Do you have any idea how much I lusted after you?

Ariel - Why didn't you do something? I wanted you to.

Andrew - You were this diplomat's daughter, raised by nuns. I was shy. We were not in love. It was pure animal lust.

Ariel - That's just what I was in the mood for.

Andrew - I know. I missed an opportunity. I've regretted it ever since.

Ariel - That's the saddest thing in life, a missed opportunity.

Andrew - And particularly rotten in this case. Because after you left, a month after you went to Europe, I learned that you were, and had been, sleeping with everyone. Everyone!

Ariel - Not everyone. (pause.) Well, maybe it was everyone.

Andrew - I wouldn't have been the first, I'd have been the 30st. Writers, bankers, poets, the entire infield of the Chicago White Sox.

Ariel - You have to admit, I wasn't one of your shrinking, mousy, inhibited virgins.

Andrew - The understatement of the century.

Ariel - Did you want me to take charge? You didn't act like you wanted anything.

Andrew - I was used to slower women. Adrian and I had no sex till we were married.

Ariel - Why are we rehashing all this? Huh? It's over. We're two older people now. By tomorrow this time, I'll be married too.

Andrew - What is it with you and Leopold? He's so much older than you.

Andrew - So what? If you're such a free spirit, why do you want to tie yourself down?

Ariel - You know. For a woman, the years slip away quickly.

Andrew - Don't tell me you're getting scared.

Andrew - But why? I don't understand. You're so beautiful and charming. You could get any man that you wanted.

Andrew - That was always true, Ariel.

Ariel - I think amongst all the love affairs I was running through then, you were the one person that could have stopped me.

Andrew - I could have?

Ariel - Yeah. I... I was really beginning to care for you.

Andrew - Sometimes I wonder what would have happened if we'd made love that night. The moment was so perfect.

Ariel - People find out things about themselves through lovemaking that they never dreamed of. What? What are you thinking?

Andrew - Nothing. Only that our whole lives might have been different if only I had acted.

Ariel - Tell me something, Andrew. If you lusted after me so, why weren't you also in love with me?

Andrew - Can the two feelings really be separate? 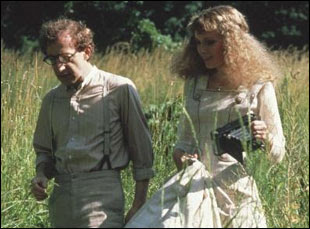