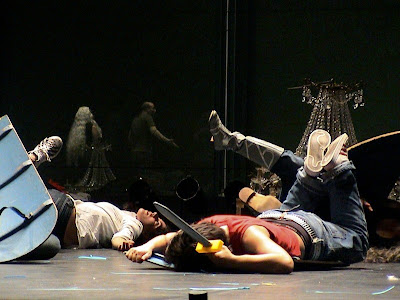 One takes recourse to music when all other means and strategies fail - it is only by music that one can bend the Other, obtain mercy, and produce love; only music can reach beyond the social to nature and the gods. But if in the operatic tradition up to Mozart, this power of music immediately translated into the redeeming power of love, which found its expression in the final act of mercy or in the final act of marriage, then music, in Kierkegaard's view, primarily is the demonic power of sensuality, the sphere excluded from the spirit and love, the sphere beyond mercy. Kierkegaard also believed that the power of music oversteps every structure and rational reasoning, but this transgression for him occurs in a radically opposite direction. The question is not whether it extends to gods and to nature, as in Orpheus; on the contrary, as far as it extends to nature by presenting pure, natural motive force and sensuality, it is the farthest away from God. The truth of love and mercy is Don Giovanni, the thing beyond love and mercy as a true embodiment of music. Ultimately, mercy and love are only a mask of the demonic nature of music, its deceptive disguise. But this subjects music - and, hence, the opera as its true embodiment - to a radical ambiguity, a fundamental ambivalence: The highest force of love and mercy coincides with its excluded opposite, with the lowest demonic force of sensuality, with radical evil. It seemed that music would reach to God as well as bring love and reconciliation to the community; but it turns out that it may be nothing else but the most sublime invention of its demonic counterpart. Does music stem from the Devil? If it has the power to make the Other yield not because of its sublimity but rather because of its sensual and erotic nature, then it is able to bend the Other only by allying itself with the demonic power in order to seduce the Other. The music is not the sublime power capable of taming nature; rather, it stands for the triumph of sensual nature over spirit. Here Orpheus's "Acheronta movebo"* attains its opposite, its Freudian ambiguity. The annihilated subject who lost everything in its attitude of humilità o supplicazione, in its lament directed to the Other, has not really lost everything and only seemed to be annihilated - it retained the voice, the music, and thus the most subtle connection to demonic sensuality, its quintessence.