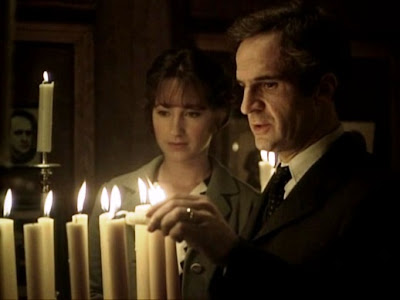 
In The Birth of Tragedy, Friedrich Nietzsche describes Greek tragedy as the cataclysmic fusion between the Apollinian force that is governed by reason, and the Dionysian force that is governed by emotion. In opera, it is embodied in the liebestod of Richard Wagner's Tristan und Isolde: a celebration of profound love eternally locked in the embrace of death. In literature, it is the unspoken motivation behind the meticulous von Aschenbach's irrational attachment to the cherubic Tadzio in Thomas Mann's novella, Death in Venice (adapted to film by Luchino Visconti in 1971). And then, there is The Green Room (1978), a thoughtful, reverent adaptation of Henry James' The Altar of the Dead, an atypically static and somber film by François Truffaut.
The parallels between von Aschenbach, the tragic hero of Death in Venice, and the impassive Julien Davenne, reflect their innately similar human nature. As von Aschenbach's attraction to Tadzio (or more specifically, to the boy's physical embodiment of youth, energy, and beauty) precipitates his liebestodic death in Death in Venice, so too does Julien's obsession lead to his demise in The Green Room.
Von Aschenbach, an intellectual who has never been governed by emotion, finds himself reluctantly succumbing to his suppressed passion. Despite a ravaging cholera epidemic, von Aschenbach is unable to leave Venice for fear of losing his beloved Tadzio. Figuratively, like Julien, von Aschenbach is surrounded by the pervasive specter of death. Aschenbach's desire to reclaim his lost youth and vitality are transferred to the ideal image of Tadzio, and he is inevitably consumed by that desire.
Publicada por Pedro Zegre Penim