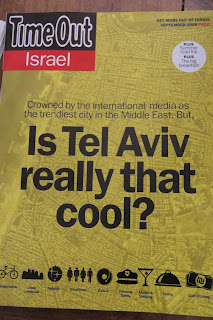 Awaken by the heat of the moment. Long shower. Cleaning the impure kitchen. Washing the dishes and utensils left by the non-gentiles that own the kosher house we rented in Shlomo Hamelech (a.k.a King Sollomon). They are the Siksik family: father Serge, mother Peggy and their off-spring Gregory, Liora, Alexandre and Eleonor. Breakfast: sweet grapes, chocolate milk, lemonade, white bread, butter and cinnamon biscuits (bought yesterday in a close by supermarket at 3 a.m.). Heading to Hilton beach to relax the body in water. It is forbidden to swim and, as in all prohibitions, it is not really clear if it is for our own good or in behalf of the prohibiters. We comply first but then, in the absence of any immediate punishment, we transgress. Absolutely no difference in temperature between the air, the water and our bodies. If this would be a buddhist state we could really say we were one with all. Pedro feels like a soldier in Lebanon's sea shore. I feel like Jim Carrey in the Truman Show. We both feel too good to be true so it is obviously fiction. It seems good to live here. In the morning one goes to the gym to strive for perfection, in the evening one shows off perfection in a cosmopolitan terrace. In between one must work but that is not the main focus of life. Living in a state of war and paranoia must be very relaxing since we haven't seen any trace of daily stress in people's faces. Walking across the city on the way to CCA to meet Sergio Edelsztein we are mistaken for locals. We must be doing something right. Sergio shows us his space and then takes us for a coffee. Three sentences leave us puzzled again: the boycott is sensible, US christians (and not Jews) are the real financial supporters of Eretz Yisrael and extreme right and extreme left want exactly the same thing (a bi-national state). We get hungry and decide to meet with Oded for breakfast (a meal that, like Christmas, happens whenever a man wants). Pedro has Israel, Oded gets benedicted and I go Texas style. The table is not big enough for all of us, and so is Israel to all of them. Oded, like Sergio, thinks that Lieberman is a fascist and that something is bound to happen. If so, Sergio will go to Argentina and Oded to Berlin (places that oddly are not so foreign to the concept of totalitarianism as one absent minded spectator of world history would think). We end the night with the promise of going soon to a gay club that apparently has no less than six Palestinian nights a week. God has not manifested himself to us directly but so far it seems that he provides his people by filling the streets with all eventual needs one may have. Among many things we've seen books, a slice of pizza, water, a baby stroller, half a coke, several places to attach your bike to, containers for wheelchairs and prosthetics-to-come and an outstanding population of personal pets (one could even think that here cats and dogs really rain, although water does not seem to do so). Back home I put in the washing machine the two rugs of the house. I know that our trip to Ramallah is still faraway but is always good to prepare ahead. Shalom or Halecum Salam to all the pros and cons of hitchhiking to Israel!
Publicada por catarina campino