Žižek in a nutshell #5

One of the popular chocolate products on sale all around Central Europe is the so-called Kinder, an empty eggshell made of chocolate and wrapped up in a lively coloured paper: having unwrapped the egg and cracked open the chocolate shell one finds in it a small plastic toy (or small parts from which a toy can be put together). Is this toy not l’object petit a at its purest – the small object filling in the central gap, the hidden treasure in the centre? A child who buys this chocolate egg often nervously unwraps it and just breaks the chocolate, not bothering to eat it, worrying only about the toy in the centre – is such a chocolate-lover not a perfect case of Lacan’s motto ”I love you, but, inexplicably, I love something in you more than yourself, and, therefore, I destroy you?” In other words, the small plastic toy is not simply different from chocolate (the product we bought); while materially different, it fills in the gap in chocolate itself, i.e. it is on the same surface as the chocolate. (In France, it is still possible to buy a desert with the racist name La tête du nègre (the nigger’s head): a ball-like chocolate cake empty in its interior (“like the stupid nigger’s head”) – the Kinder egg fills this void. The lesson of it is that we all have a “nigger’s head”, with a hole in the centre. And this egg provides the formula for all the products which promise more.
The function of this “more” is to fill in the lack of a “less” to compensate for the fact that, by definition, a merchandise never delivers on its (fantasmatic) promise. In other words the ultimate “true” merchandise would be the one that would not need any supplement, the one that would simply fully deliver what it promises – “you get what you paid for neither less nor more”. No wonder, then, that these eggs are now prohibited in the US (…) these eggs display too openly the inherent structure of a commodity. 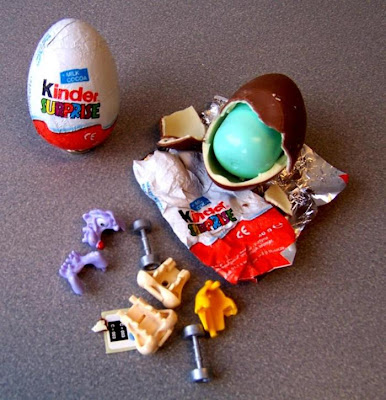