the first time the word HOLOCAUST was used:

"The first is from Time Magazine, November 17, 1947. It tells of a fire in Bar Harbor, Maine, that killed thousands of lab mice - brown mice, white mice, black mice:

After the blackened buildings cooled, Director Clarence Cook Little walked sadly among the cages of roasted or suffocated mice. A few "little fellows" looked up with frightened eyes, among them two elederly fat yellow mice. But survivors were few. Out of the 90.000, only 55 were alive. The mouse holocaust was a major disaster to researchers in medicine and biology..." 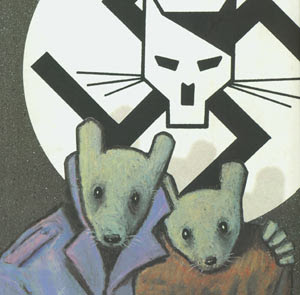